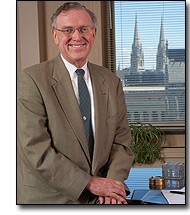 Please join us for our Annual Dinner at The Duquesne Club on January 19th when we will welcome guest speaker Dr. James V. Maher, Distinguished Service Professor of Physics, Senior Science Advisor, Provost Emeritus at the University of Pittsburgh.

A public research university plays a major role in the economic development of its region by educating undergraduates to be highly sophisticated employees and voters, by educating graduate and professional students to provide the most advanced experts for key technical and leadership roles, by the economic activity resulting from the intellectual property and other innovations emerging from its research laboratories, and by the direct revenue brought into the state through its research activity. During the past seventeen years, Pitt has materially improved its performance in all these areas of endeavor, and it plans further improvement despite the constraints posed by the national recession and the national and local trends to reduce public support.

ABOUT OUR GUEST SPEAKER:

Dr. Maher earned his bachelor’s degree in physics from the University of Notre Dame in 1964. He earned his master’s and doctoral degrees from Yale University in 1965 and 1969, respectively. Prior to joining the University of Pittsburgh faculty as an assistant professor in September 1970, Dr. Maher served as a post-doctoral research associate in the Physics Division of the Argonne National Laboratory in Argonne, Illinois.

During his tenure at the University of Pittsburgh, Dr. Maher has served as director of the University’s Scaife Nuclear Physics Laboratory, as a longstanding resident fellow in the University’s Center for the Philosophy of Science, and as a visiting scientist at the Niels Bohr Institute in Copenhagen, the Kernfysisch Versneller Instituut in Groningen, the College de France in Paris, and the Argonne National Laboratory in Chicago. Elected a fellow of both the American Physical Society and the American Association for the Advancement of Science, Dr. Maher has published numerous papers in refereed journals on the fields of nuclear physics (up through 1980) and statistical condensed matter physics (since 1980). He has presented numerous invited talks at topical conferences and physical society meetings.

Dr. Maher is a member of the Board of Trustees’ Information Technology Committee at the University’s partner institution, the University of Pittsburgh Medical Center, and serves on numerous national and local professional society committees and boards, including St. Vincent Seminary’s Board of Regents, the Carnegie Science Center Board of Directors, and the Board of Directors of BioOne.

He served as chair of the Council of Academic Affairs of the Association of Public and Land-grant Universities and was a member of the Association of American University’s (AAU) Intellectual Property Task Force that authored the formative 1999 report “Intellectual Property and New Media Technologies: A Framework for Policy Development at AAU Institutions.” He served on the AAU/National Association of State Universities and Land Grant Colleges (NASULGC) Task Force on Accreditation, which developed a set of principles adopted by the AAU and NASULGC and accepted in modified form by the Council on Higher Education Accreditation. He was invited by the AAU and Association of Research Libraries to participate in writing the influential Tempe Principles on Scholarly Communications, a set of principles designed to guide the transformation of the scholarly publishing system.

Perspectives on Mental Health as a Fiduciary

“What the Cool Kids are Doing in Estate Planning”